Free Delivery on everything // Fuss-free returns 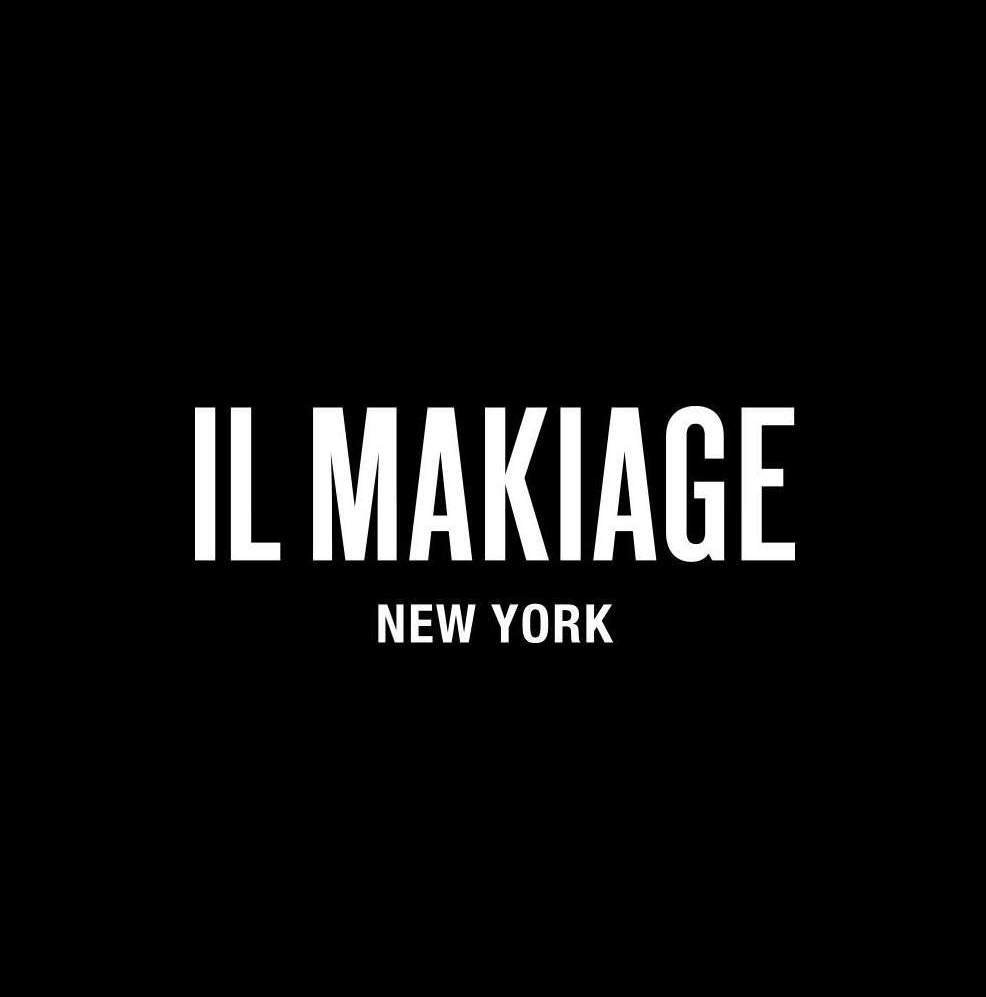 After being bombarded with Insta & Facebook ads for months, I finally purchased Il Makiage foundation ‘Woke up like this’. I’ve been looking for a new foundation because I was becoming more and more uncomfortable wearing my current foundation, Estée Lauder Double Wear, because it’s not cruelty-free, unlike Il Makiage who are cruelty-free. I bought it in 2019 so figured I was due an upgrade. I have combination skin & Double Wear leaves my forehead at the end of the day as oily as a frying pan – I’m hoping this new one isn’t the same.

Shade matcher quiz – how does it work?

They have a shade matcher “power match” on their website which I must say, is pretty accurate. It suggested 40 for me, but I ended up going with 35 because I sent their customer service team on Facebook my photo and they came back with 35 as their suggestion (without prior knowledge of my shade match). 35 & 40 are next to each other in the shade list, so extremely similar. 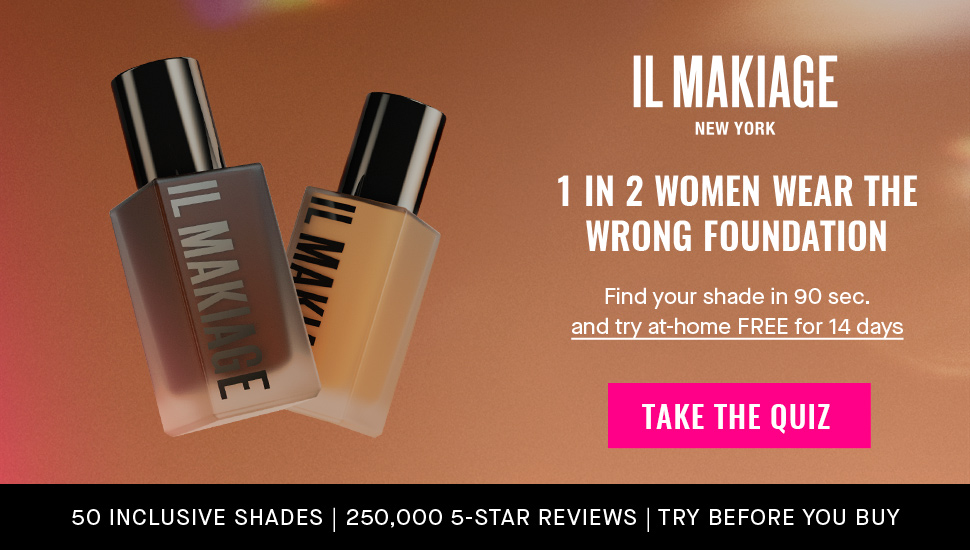 Il Makiage #35 a lot less yellow-y than my current foundation, Estée Lauder Double Wear Stay In Place, 1W2 Sand. Il Makiage shade 40 looks more like this colour, interestingly, as I was suggested this shade by the shade matcher. Il Makiage’s 35 is in my opinion a much better colour for my skin. Estee Lauder’s would probably suit me with a tan.

My face has different concerns – I have sensitive eyes, my forehead & sides of my nose are oily, around my mouth is sensitive & dry; the rest is normal. My current Double Wear foundation makes my forehead even worse with the oil – so much so when I get in from work (after 10 hours) I’m dying to get it off. It also flakes on my dry patches. I can’t deny it though, Double Wear gives amazing coverage. If you have normal skin, I can imagine it stays on all day and looks amazing, but it’s not cruelty-free so a re-purchase for me is off the cards.

So I have high-hopes it won’t leave my skin a flaky greasy mess by the end of the day. I also work out after work, when I’ve got makeup on, so I’m going to test whether or not it stays on after sweating.

What’s the coverage like? How much product is needed?

I like a light coverage. I’m 33 so I feel too much makeup looks worse due to the texture/fine lines that are appearing. ‘Woke up like this’ is buildable so I guess you’ll be able to pump as little or as much as you want.

Before I put the foundation on, I moisturised with my usual stuff:

I bought these from Feel Unique (use my friends & family code & we both get 15% off).

It says on the Il Makiage website to use a primer to ensure the foundation stays on for as long as possible. That’s fine by me! I used a bit of Revolution Ultra Face Primer.

Here is Il Makiage’s Primer – I haven’t tried it yet but it’s on my list.

I worked out and got sweaty – I don’t know about you but my skin actually looks better. Dewy but not greasy. The foundation also stayed on; it didn’t go clumpy, melt or anything else.

Okay so this instagram post is pretty convincing. It looks like one swoop covers her skin flawlessly. My personal opinion is for this woman to get full coverage like that in that small area, it would take at least 1 full pump. Pretty unrealistic considering I used 1 pump to cover my whole face (yes ok, she blended it in, but this video makes it look like the coverage is easily applied whereas in real life, I believe it would take at least 3 pumps to get this coverage over the whole of your face).

I’m not sure if the makeup caused this, but after 2~ish hours of wearing the makeup, my eyes started to itch/red, puffed up and my nose became runny, similar to what I get with hay-fever. I don’t normally suffer much with hay-fever, only a bit, and never had it inside the house before.

I’ve occasionally had the odd product that makes my eyes red, but it’s previously been mascaras rather than product for the face. I’ve tested again on another day and it’s been fine. I don’t know if it was the makeup, or if something else I put on my face irritated me (I used the same moisturisers though).

What I wanted in a foundation was something that:

I would definitely recommend this foundation. Even though they don’t give out free shade testers, the fact I got the suggestion from their customer service team gave me confidence I ordered the right shade – and they were right! I’m not dying to take my makeup off by the end of the day because it doesn’t worsen my oily skin. After wearing for 10+ hours, my skin still looks fresh with uneven skin tone & imperfections still covered – not as good as the morning but still impressive.

Apart from the random blip where I suffered sensitivity around my eyes, I haven’t experienced this since and have had it a few days now so I’m not sure this was the foundation. I’ll continue to monitor and report back.

Skin prep tip – a must to keep foundation looking its best

Make sure you dermaplane your skin to smooth it out as much as possible. I do this once every few weeks and it makes SUCH a difference. Yes ‘dermaplaning’ is basically a fancy way of saying you ‘shave your face’ but it also removes the dead skin cells making your skin super-smooth. I can confirm after years of doing this, hair does NOT return thicker/darker.

How much is it and where to buy?

It’s £36 + delivery, £3.95. Delivery is free over £40 which is kinda frustrating as their most popular product is just below the threshold. Sneaky. Even using welcome10 to get 10% off only just about makes the pain of a delivery charge bearable.

As mentioned above, use welcome10 for 10% off from their website Il Makiage.

Final tip (and most important)

Don’t drop the bottle on a hard floor or this will happen. *cries*

It doesn’t seem to work well with my Alpha H vitamin C cream or Bondi Sands daily SPF moisturiser. It crusted on my cheeks. This was after a 10hr day + a workout. Not too fussed about it crusting after a workout as I’m generally at home but I’ll monitor this as I wouldn’t want it to start crusting whilst still at work. My cheeks are pretty dry and do flake often when wearing makeup, so it’s not something that’s new to me.

I’m going to try their primer next to see if this still happens.

I was still having problems with the crustiness so I bought The Ordinary primer and it was working much better than the Revolution one. Although I’ve had to chuck the foundation away as it dried up in the tin I was using above 🙁 my own fault after dropping it, but – gutted.

Thanks for reading :) This article is tagged with:

← Go back to articles